Dragon’s Maze releases events start this Saturday at noon at Game Universe Greenfield and Menomonee Falls. Sealed deck and booster drafts continue all afternoon, $30 for Sealed and $15 for draft with an 8/4 pack payout per table.

Sunday, Game Universe Brookfield joins the action with 2-Headed Giant at Noon, with side-drafts all day. Sealed 2HG is $20 per person or $40 per team.game rpg mobileвиртуальный московский номер

This Friday, May 3, Dragon’s Maze goes on sale at all Game Universe locations. Booster boxes will be $99 on Friday only, and the first 30 customers will get a Buy-A-Box Promo card! We will also have a supply of Fat Packs, Intro Decks, booster packs, and of course, Dragon’s Maze singles! 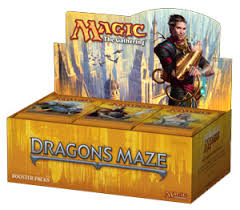 Build a 300 point team that has a minimum of three separate figures. All the figures on your team must be variations of the same hero or villain.
For example, if you chose Mr. Fantastic as your character, all the figures on your team must be variations of Mr. Fantastic. However no duplicate
figures, a duplicate is a figure with the same set symbol and set number. LE versions of a figure may be used. Dual based figures will qualify as long
as the chosen figures name is one of the names on the base. Playing for: TBD. In addition, For this event there will be a $1.00 entry
fee that will go to a prize pool that will be given to the winner in the form of store credit.

Players will purchase two boosters of Teen Titans and make a 400 point team. The cost for the final events will be $35.00 per player, in addition to the No Man’s Land prize support, for every eight players entered in the event Game Universe will include a Teen Titans super booster as additional prize support.  The twenty person rule is in effect for this event, first twenty players, that have played at least one No Man’s Land event at Game Universe, will receive a participation prize with preference going to players signed up in advance at the Heroclix event system.

Thursday, May 30th 5:30
Keyword Wars Future Vs. Past
Constructed Golden Age
Build two 300 point teams, one with all characters possessing the Future keyword and one with all characters possessing the Past keyword. When players match up one will play the Future team and the other will play their Past team. Players do not need to make a theme team but if they have at least three figures on their team then they will have a theme team. Battle Field Conditions, Feat Cards, and ATA’s are allowed as are special objects but no resource dials.
Playing for: TBD

Are you new to Warhammer or starting to build a new army? Bring in your 500-1000 point army and we’ll play the ‘Clash of Heroes’ Battle Mission. (12:00-6:00).  Armies should consist of an independent character, 0-1 HQ, 0-4 elites, 2-6 troops, 0-1 fast, and 0-1 heavy.
If you have never played Warhammer but want to learn what it’s all about we will be running a demo at 1:00 to teach the basics of the game.
May 12 – Warhammer 40K First Contact:
Recreate the first meeting of two interstellar races on a distance planet, which inevitably erupted into a firefight!  Bring in your 1500-2000 point army for the ‘First Contact’ Battle Mission.  One army will have to defend the entire board while the other will swarm in from all sides.  A good deal of random unit placement will result in a fast paced and deadly battle.  We’ll set up as many tables of terrain as needed to fit in all players.  Games start at 12:00.
May 19 – Warhammer 40K Small Army Smack-Down:

Are you new to Warhammer or starting to build a new army? Bring in your 500-1000 point army and get in some quick games. (12:00-6:00). Depending on the armies available, we will set up some random battle missions to test out your new force.  If you have never played Warhammer but want to learn what it’s all about we will be running a demo at 1:00 to teach the basics of the game.регистрация в каталогах googleтест инета

The Guild Prerelease packs at the Dragon’s Maze Prerelease are going to be a bit different than those you used at the Return to Ravnica and Gatecrash Prereleases. Inside they will have:

Everyone who plays in a Dragon’s Maze Prerelease will receive a ‘Maze’s End’ alternate-art promo foil card, while supplies last. This card will not be playable in your Prerelease deck.

There’s also a maze! Players (that’s you) will work collectively to advance their chosen guild through the Implicit Maze each round. There are prizes for each guild that gets all the way through the maze, and special prizes for the first guild that does it. And when the maze is completed, all participating players will receive a premium (foil) basic land promo card!

We will be accepting pre-registration for our Midnight and 1 pm events on Saturday (in Greenfield and Menomonee Falls, from now until we close after FNM on Friday, April 27. Those who pre-register will be guaranteed the guild of their choice – anyone registering at the door will receive their first choice only while supplies last.

All Menomonee Falls Events are limited to 64 participants for the comfort of our guests.
FRIDAY APRIL 26 – MIDNIGHT

Remember to ask us about pre-registration!

Approximately 3 packs per player will be added to each sealed event prize pool, and 2 packs for 2HG Sealed. Some of our later events may be 2 packs per player due to product availability. Prizes may contain limited amounts of Return to Ravnica or Gatecrash boosters, based on product distribution in Guild Packs.